Boxing Day is capable of producing an array of winter conditions, most of them tending towards the unpleasant end of the scale, but this year we enjoyed a lovely winters day with sunshine, blue skies and light winds. Given the stormy weather which had preceded Christmas and the horrendous day which followed Boxing day we were indeed lucky to have raced in the lull between two storms. 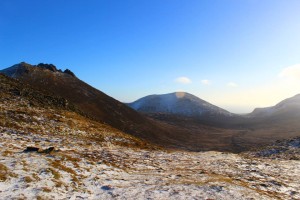 As usual at the start line there was a flurry of activity as we checked that everybody was carrying the correct gear and tried to deal with those who always turn up unprepared for the potential dangers and consequences of an accident in the hills in winter. We managed to get everybody kitted out one way or the other and a record number of 95 runners were sent on their way up the Trassey track. 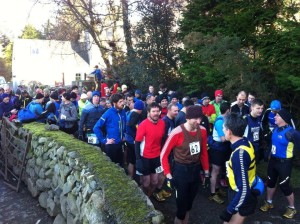 Runners get ready for the start!

Soon a group of Jonny Steede, Seamus Lynch and ultra runner Eoin Lennon had broken away and were climbing strongly to the first col between Bearnagh and Meelmore. The traverse around Meelmore saw Eoin dropping back as Jonny and Seamus went through the second col together. 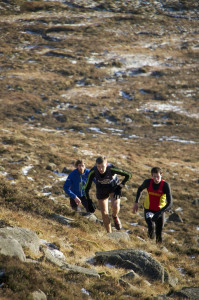 The Steede leads the field towards the col

Hard ice covering the rocks was now a problem which demanded care, then it was the fast descent of the Happy Valley which the two top fell runners revelled in. Eoin Lennon admitted that the downhill charge was not his strong point; but it certainly was for Neil Carty who surged past to be in third place by the start of the Ulster Way section. Megan Wilson was well ahead in the ladies race. 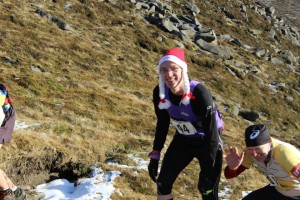 Jonny and Seamus continued their battle all the way along the Ulster way then back down the Trassey Track and it was only on this last section that former winner Jonny Steede finally managed to get the lead which brought him victory. Neil Carty held third place with Eoin forth and a fine run by young Jack Miller brought him home in fifth place just ahead of a bunch of experienced mountain men including top vet 50 Dale Mathers.

Megan Wilson was the comfortable winner of the ladies race with Vet45 Denise Mathers second and Poppy de Coursey Wheeler third.There was a good spread laid on at the Mountain Centre which was soon demolished by hungry runners and plenty of prizes provided by members of the Barf club (ranging from a bottle of single malt whiskey to a bottle of windscreen wash) and by Jacksons Sports shop of Belfast. 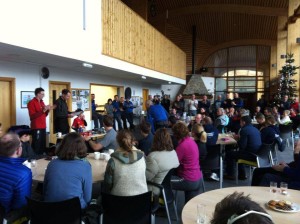 Thanks to everybody who helped out both on the hills and with the catering and to the Mountain Centre for the use of their excellent venue. Looking forward to seeing everybody next year and maybe we will be lucky with the weather again but whatever – please come properly prepared.