As part of the ongoing BARF Social calender of events, 17 brave Barfers took up the challenge of ’Run Gully Run’ on Sunday 17th April 2016. 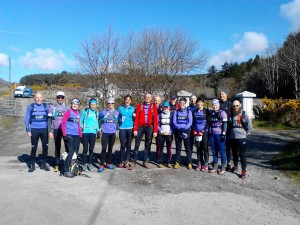 This covered a route mirroring the Annalong Horseshoe race, but focused on running to 6 gullies and scrambling areas to have some fun. Height was quickly gained running to the quarry on the south side of Chimney via Long Seefin, then scrambling over a few small crags before tackling the 3 Tors on Chimney itself. 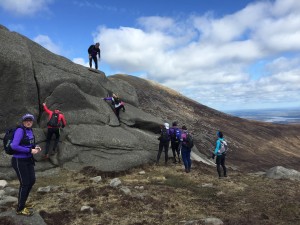 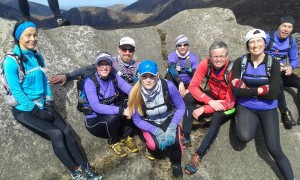 Then the run continued down to the bog of Donard, then brandy pad arriving at the base of the main Castles gully on Southside of Commedagh. A steep climb over loose scree to the top offered great views of the rock formations within, the valley, and surrounding high mountains. Running, further along, to regain the horseshoe route again, we descended a small track on the lower crags of Beg to gain access to the bottom of the Devils Coach Road gully.

This provided great scrambling to the top and an exhilarating climb out for a well-earned lunch break at the top. On the move again brought us down a steep descent to the Annalong Valley shaving the lower crags of Upper Cove to arrive at our final climb up the gully beside Lower Cove cave. Having rescued a newborn lamb from steep ground and releasing on safer ground, we breached the top for a pleasant run over the summit crags providing spectacular views. 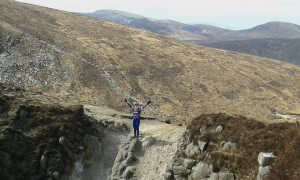 Is it lunch time? YES!

It was time to head home with a steep descent down a quarry track to gain access into Annalong Wood and the Binnian pipeline tank. A quick chilly dip here to refresh tired limbs and awaken the body soon saw us on the one-and-a-half mile back to the start at Dunnywater via the forest road. 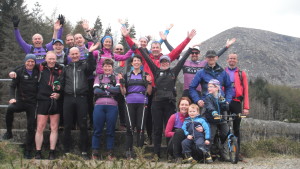 The day concluded with the BARF traditional pizza and bubbly, with the usual traybakes and cakes provided by our talented bakers. A superb day out in the hills being blessed again with super weather.

Come and join us sometime!