This is the thirteenth year Ballymena Runners has hosted the Glenariff Mountain Race, supported by the local company Glens of Antrim Potatoes. Mark Alexander commented that it must have been the best weather they had in those 13 years, as indeed the sun was shinning over the Glens and the mountains were looking majestic, green and glorious. 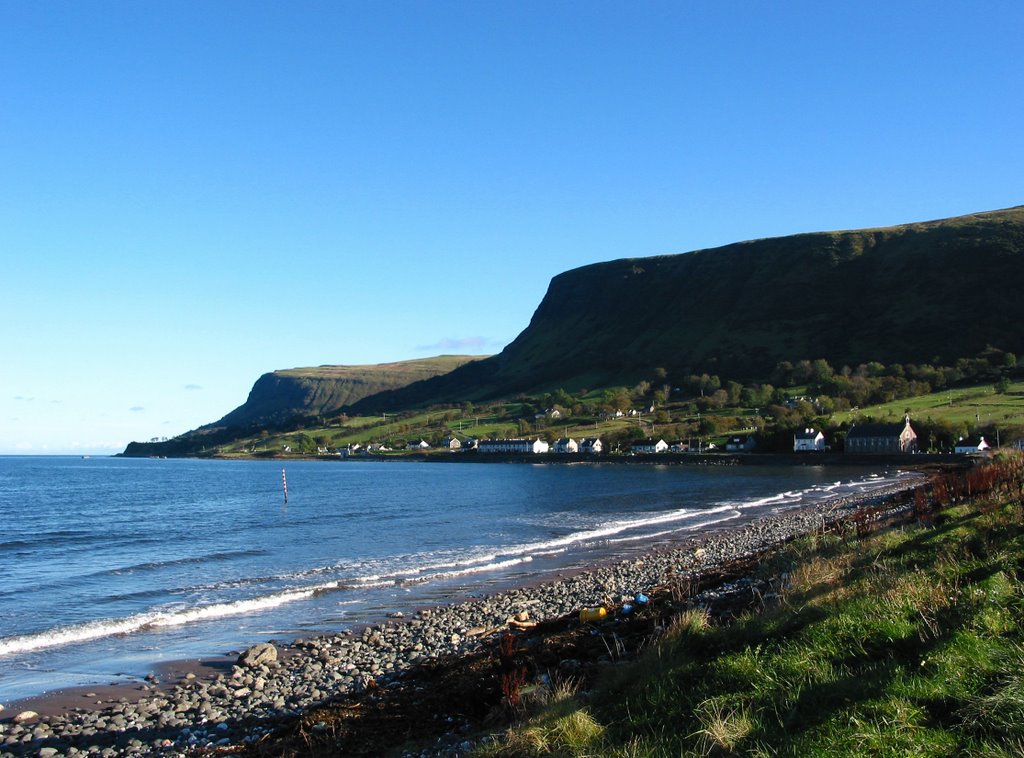 11 BARF members arrived in Waterfoot for the 1st round of the NIMRA championship races, which partly explained why Thursday night training was missing a few usual faces. With registration complete and our prized bag of spuds received, the routine clothing and shoe choice discussion took place, with more obsessing about recent shoe purchases between Martin and Dave, we all set off for a bit of a warm up. The sun was shinning, but the wind was still strong. 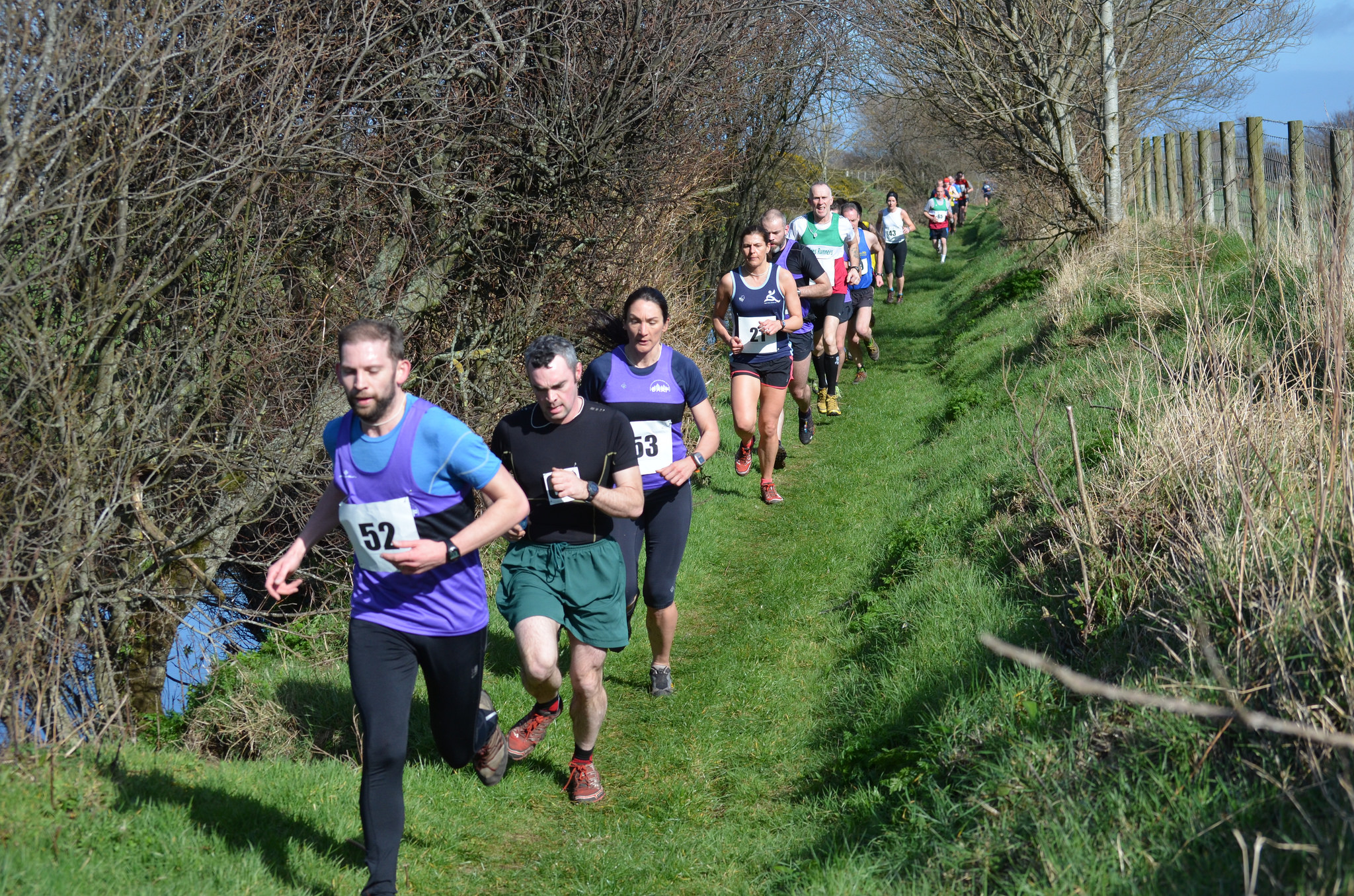 2 miles out to the hill

Jim Brown gave good advice at the start, “This is a race of 4 parts. The flat run out, the uphill mountain section, the downhill and the flat run back to the finish” Everyone has their own strengths so this is a race that’s definitely not over until you cross the finish line. Starting in Waterfoot village we headed inland along the Glenariff riverside for 2 miles before starting a 1100ft climb up the southern face of Glenariff Glen. Once at the top we turned and retraced our steps back to the finish back in Waterfoot. Around six miles in total. 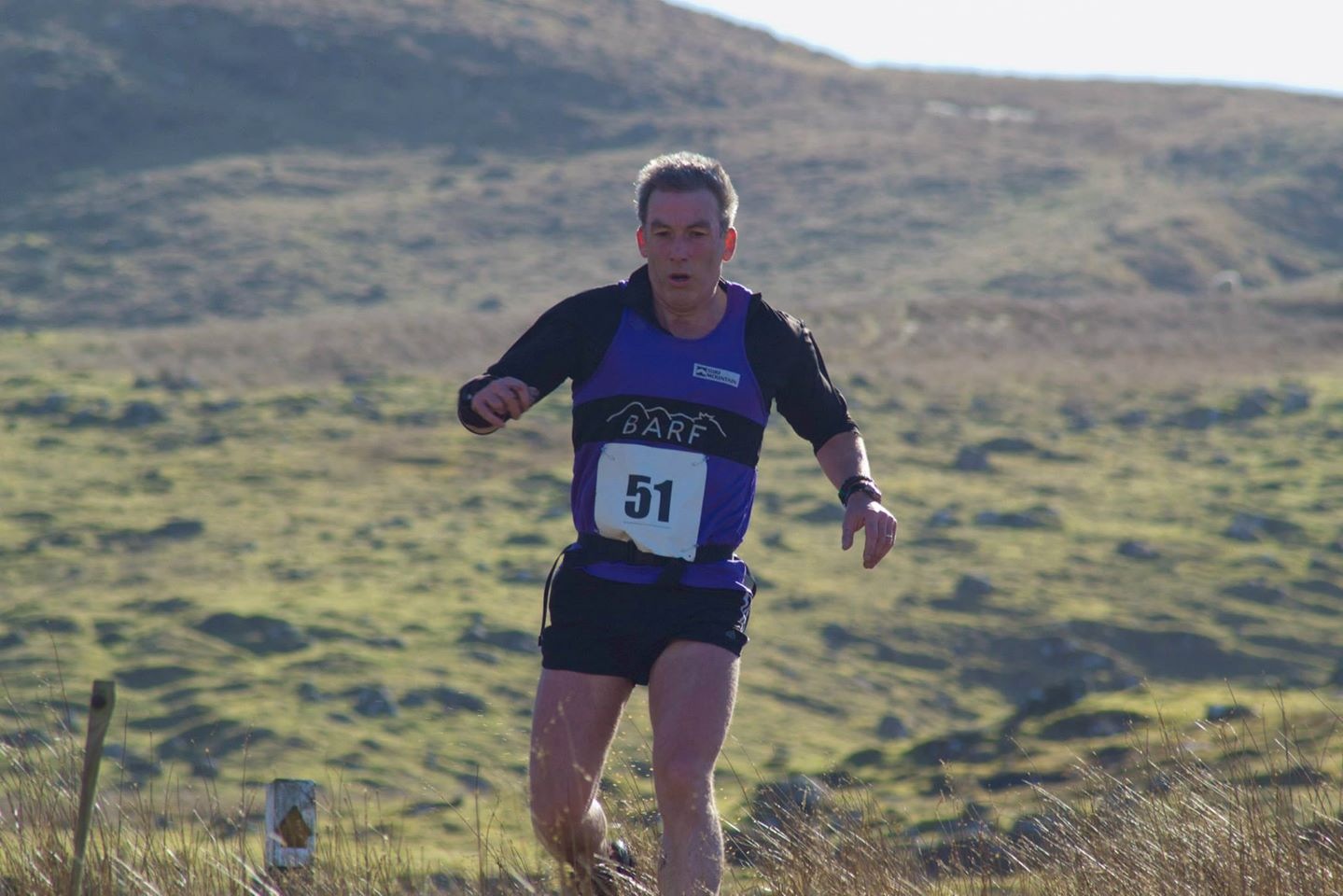 Gareth on the descent

Jim Brown was the lead Barfer, followed by Gareth Mckeown. The next 6 barf members had an entertaining close ding dong battle over the route. Unfortunately for the Barf men Taryn spotted she had a chance for 3rd female and her competitive head drove her forward, just squeezing in front of Roger and Martin for the finish. The Hill & Dale races are going to be enjoyable this year – nothing like a bit of healthy fellow club member competition. 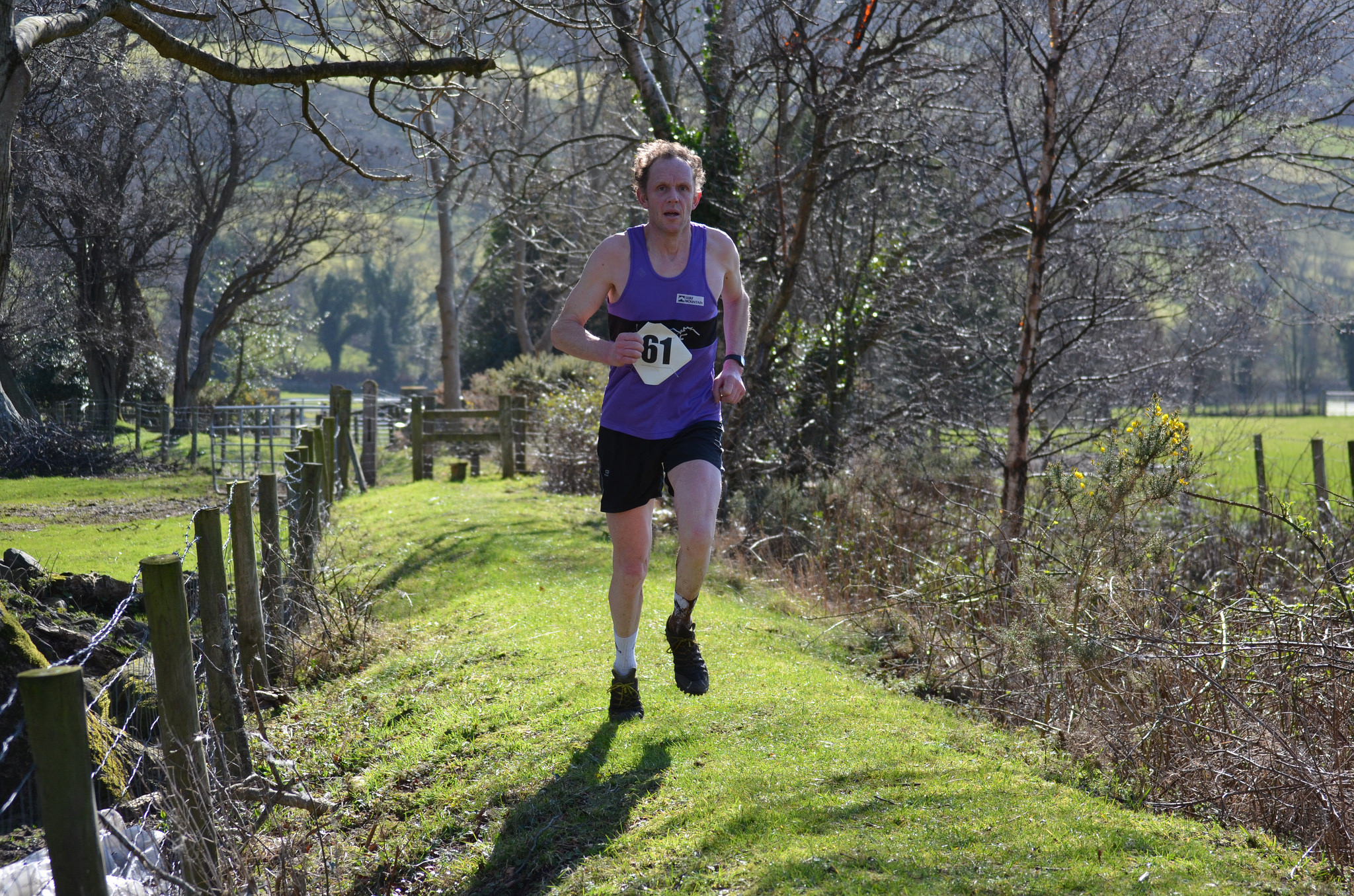 This was Robbie’s first mountain race. He said he wasn’t sure at which point to start walking or stay running, the fact he even had a choice means he’s still got enough in those legs to move up the result list! 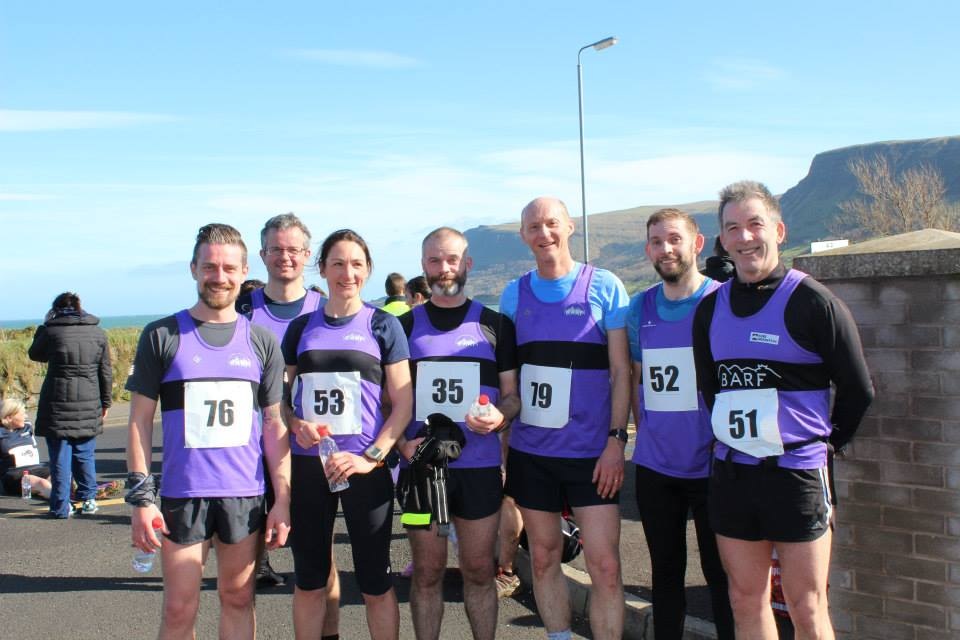 Team BARF (the others have gone for buns)

Thanks to Ballymena Runners for providing such a great race. There were plenty of smiles at the finish line, fueled by endorphins from the run, the sunshine, the fresh air and also the huge amount of sandwiches and cakes waiting for us. Well marshaled & also supported by North West Mountain Rescue.

To quote Jonathon McCloy’s very apt words about this race, “Great race, bag of purdys, mountain of food, with a river of tea and even spot prizes… for a fiver.
Race for runners, by runners (and their partners). Where else would you get it?”

Two absent faces from Saturday were Trevor Wilson and Paddy Mallon who were in Barcelona running the marathon on Sunday.
Paddy ran the Barcelona Marathon in a time of 3.19, within a minute of his PB, with Trevor 11 minutes behind. Considering Paddy was in hospital less than 10 months ago after breaking his neck after falling off his mountain bike, that’s no mean achievement. No less than the type of fortitude we expect from a BARF member. 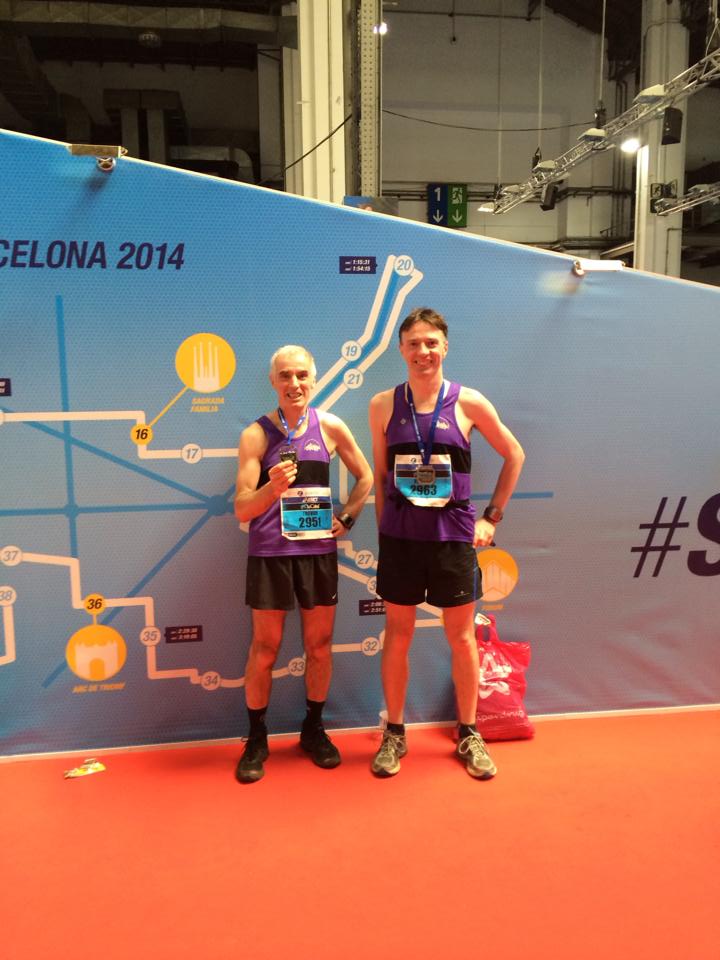