I first walked round all the Mourne peaks over 500m almost 40 years ago (1500ft back then!), on a three day midsummer camping trip. Since then the mountains have been ordered, told to stand up straight and be counted and the Rules have been set down. My interest was kindled during the development of the Rankin Round and I was keen to have a go at the 500’s this summer.

A few sporadic recce’s and then an aborted attempt in June due to poor weather were followed by torn ligaments from an old man’s stumble in the Alps in July and that seemed to rule out any prospect this year.

That didn’t, of course , prevent me from dispensing advice, most of which was wrong, to anyone who would listen, including…

(a) Best start in late evening so as to get the bit in the dark done while still fresh.
This fails to take into account that you are starting out having already been up and about for 12 hours, and that, especially in winter, you would end up travelling through two nights rather than just one.
(b) Going clockwise from Ott works best with (a) as the Mourne wall handrail helps the navigation in the dark.
This doesn’t make so much difference if you are walking, but those capable are better able to take advantage of runnable sections going anti-clockwise.
(c) A winter round shouldn’t be that much harder than summer!
This is obviously complete nonsense. Worse weather, heavier ground and, especially, the dramatic slowing of pace in the dark, all combine to make winter a much more masochistic proposition. 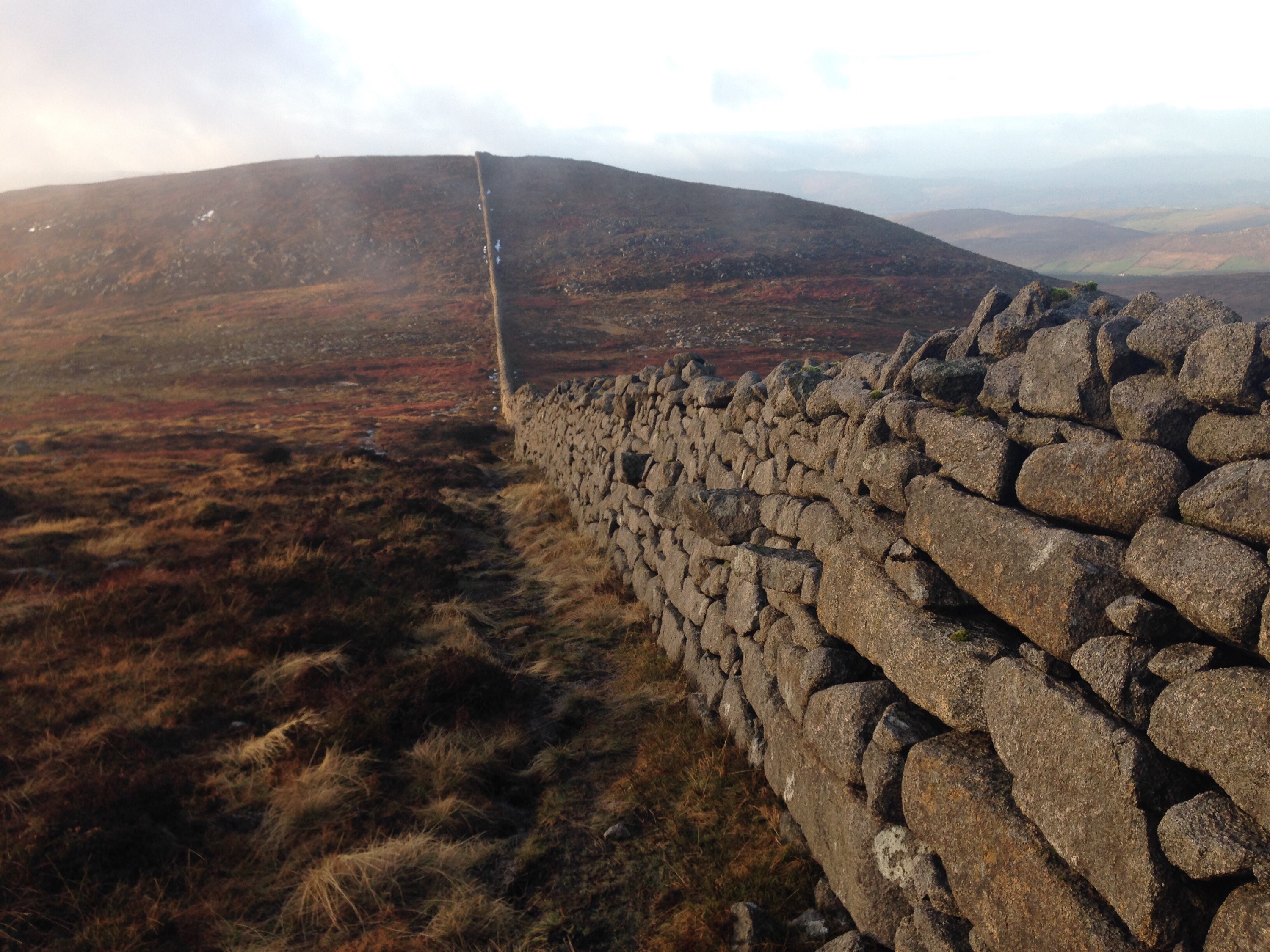 An uncharacteristic attention to injury recovery meant I was able to get out on the hills again by early October and interest grew in finishing the year with something challenging. Despite my bad advice Taryn and Joanne completed the first winter round in November in a remarkably fast time of 23 hours, but I wasn’t up to their pace, and so settled on a slow solo attempt on the longest night of the year. The solstice is when the sun stands still – the turning of the year – and the winter solstice has a particular significance in symbolising the rebirth of the year, the return of the sun and the basis of life. The hills of Ireland still hold the physical markings of that passage – marker stones and alignments abound, and there is nothing like a long journey in wild mountains through the night to remind you of your elemental needs.

I also ate a large amount of humble pie in preparation and took Taryn and Joanne’s rueful advice to start in the morning and go anti-clockwise. 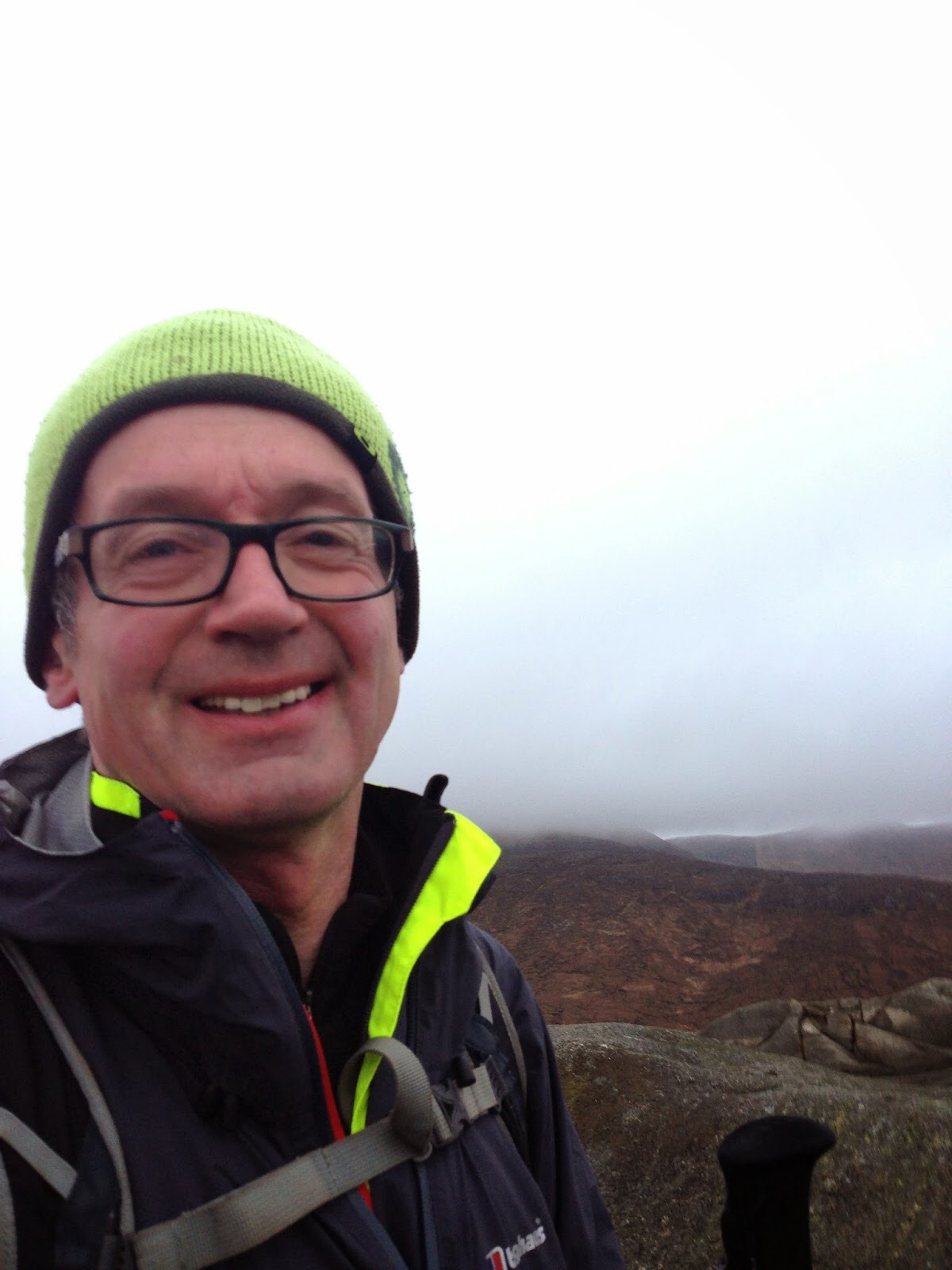 So it was that at about 6.50am on the morning of Saturday 20th December I left Ott car park. Dawn broke going over Cock mountain and low winter sun accompanied me all the way down to reach Finlieve by 10.40, where there is the first serious navigation choice. Previously I had tried the direct line approach over to the foot of Muck, but there is some pretty unpleasant ground dropping down to the Windy Gap river and then the additional climb up over the tail of the Pigeon ridge. This time I braved the Red bog – merely soggy in summer but full on calf deep water in winter, (best head to the Red Moss river as soon as possible) and down the fence line almost to Sandy Brae, before setting off cross country to the track curling through the delightful Scots pine forest at the bottom of Slievemageogh and on along the wall to the road below the south ridge of Sl Muck, stopping for lunch about 12.30. This, to me, was the worst climb of them all – over 400m straight up the ridge, but you pick off two peaks for the price of one. The weather remained fine but there were the first hints of lowering mist and rising westerly winds, all able to be ignored once I hit the shelter of the Mourne Wall, followed it to the route crossroads at the Loughshannagh col. From there, an easy stroll to Doan, the disheartening up and down to Ben Crom by 3.00pm and then the tricky direct descent through the cliffs down to the Ben Crom dam for some welcome afternoon tea of jam sandwiches and flat Coke, around 4.00pm.

Darkness caught me at 4.30pm on the top of Binnian north but it was the rising winds that gave greater concern – there had been very strong westerly gales on Friday, but had been predicted to fall during Saturday (which they did ) and not get strong until a new front came across Sunday afternoon. However, the wind rose to gale force over the tops by early Saturday evening and became the biggest energy sapping problem of the entire journey. The mist lowered to around 500m so every summit was accompanied by the visual confusion of torchlight reflected back in your face, to the extent I had to hold my head torch low to the ground to get clear sight of the ground. I had decided to use poles, and was glad I did to keep some semblance of stability as the wind got stronger, but trying to hold two poles, a compass and a torch is almost too much for a tired brain to co-ordinate. 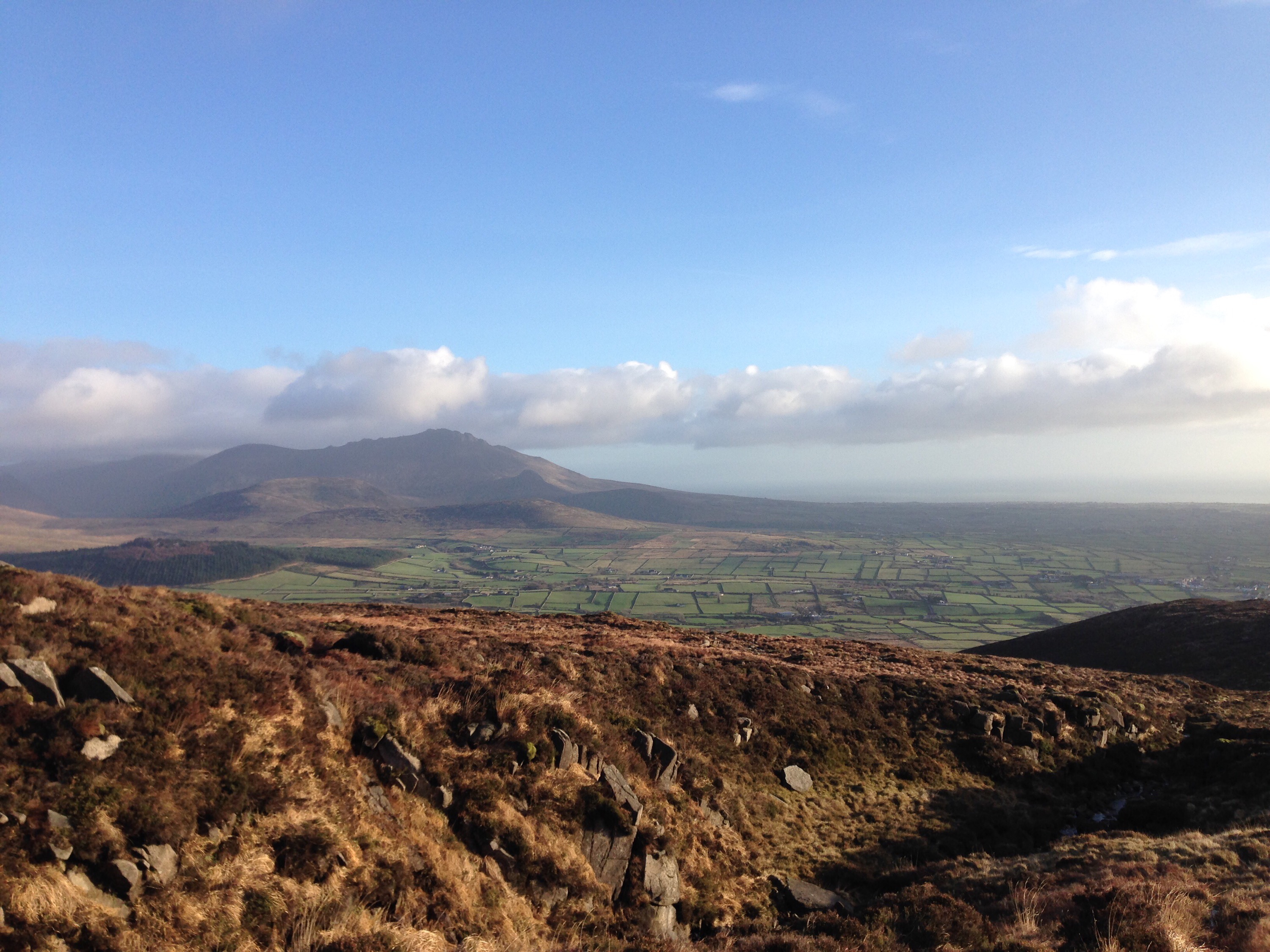 Binnian and back (sneaking round on the leeward side on the return) took well over two hours and it was 7.30pm before I hit the top of Lamagan. On, in thick mist and strong winds to Cove and Beg, feeling a bit wind battered by the time (8.45pm) I hit the Brandy Pad so rather than contour round to Chimney Rock I decided to head up over Donard (then down to Crossone, and round to Chimney Rock) so I could take some temporary respite behind the Wall again. This is clearly longer and involves the extra height of going up to the Donard/Commedagh col twice, but it seemed a good idea at the time. The top of Donard was a whirling maelstrom of cloud and I was glad to drop over the lee side towards Crossone, at least until I hit the awkward boulderfield on the descent.

Although it never rained the whole trip, the mist was sufficiently thick and the wind sufficiently strong to soak through most of the six layers of clothes I was by now wearing, and stopping for anything more than a few seconds left you chilled. I got blown over twice on Chimney Rock as Saturday turned into Sunday and my pace slowed to a crawl, but it eased as I dropped down to Spence’s and Rocky mountains and the welcome shelter of the Wall again. Commedagh was almost pleasant until the exposed summit plateau at 2.45am and the always awkward navigation down to Shanslieve – blown over again, hat whipped off in the gales and lost forever. I took a glove off to get my spare hat out of my rucksac and the glove was also blown away, so the spare gloves had to come out as well, both reminders as to how quickly things can go badly wrong.

Getting back to the Wall down to Corragh by 3.30am was a great relief and it almost felt like the home straight until I thought about what was still left. By now I was beginning to realise that I wouldn’t make my self imposed target of 24hrs, but just getting round was always the real goal. The wind exposed arrowhead out to Slievenaglogh north was passed by 4.30am and the Hares Gap reached by 4.45am. I hadn’t been looking forward to the slog up Bearnagh but was welcomingly sheltered and the snow patches along the wall were like morse code tickertape in the darkness extending my vision. I crossed Bearnagh with the tors emerging ghostlike from the mist before 6am, frightened brave campers at the Bearnagh/Meelmore col, crossed Meelmore at 6.45am and emerged into a grey dawn on Slieve Loughshannagh. 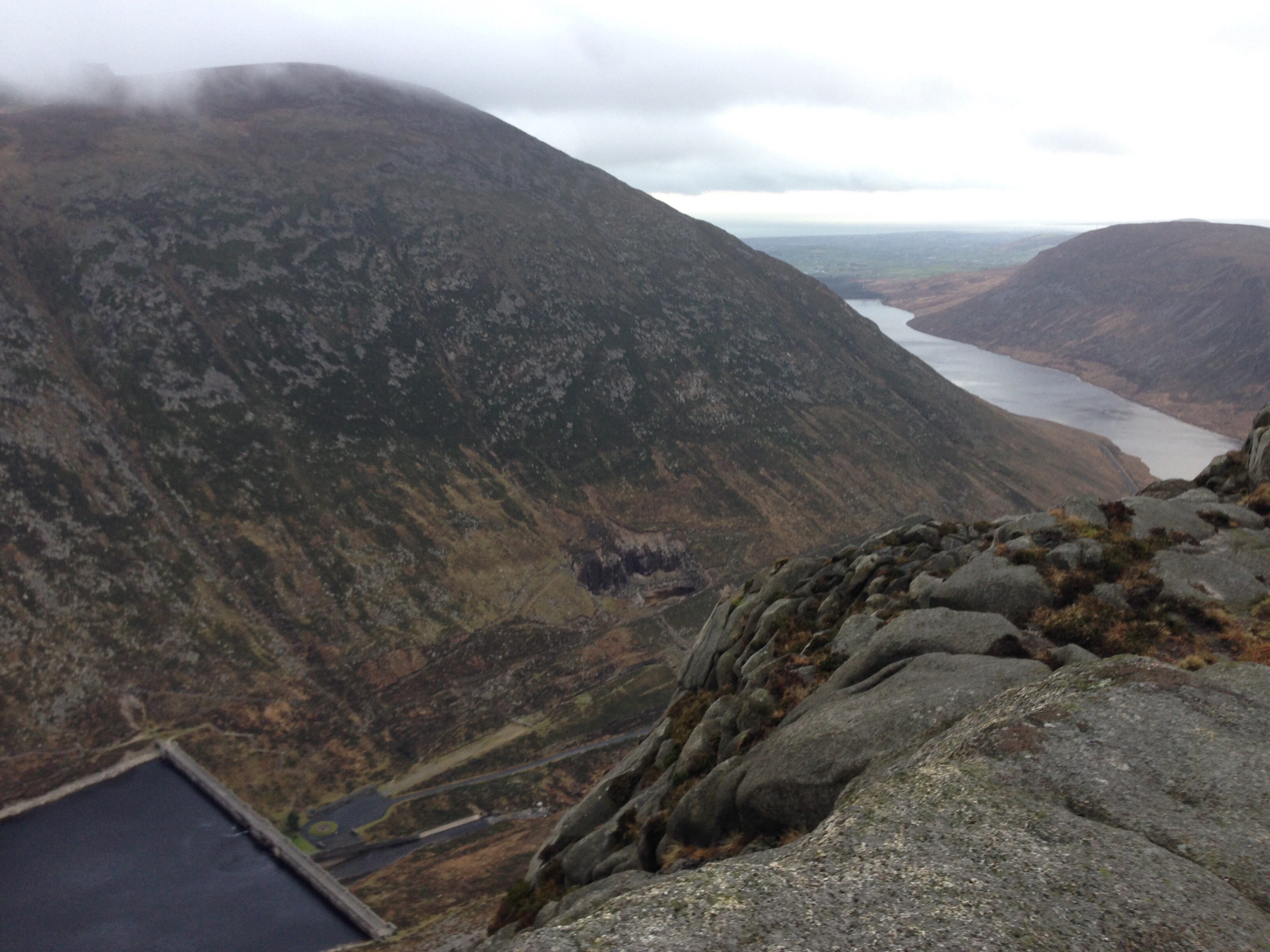 I nearly forgot about little Ott mountain at the end, finally reaching the car park at 8.39 on Sunday morning, 25hrs and 49 minutes after starting out, the longest night over, the year turned.