The real stars of this year’s event were the marshals who had to endure a torrid time of it to ensure that both the runners and walkers progress was recorded accurately. They were lashed by heavy continuous rain for most of the day and a vicious wind which made life very difficult. From the forecast we knew about the rain but such a strong wind was not expected. I think we were victims of quite a complicated weather system which was difficult to forecast accurately.

Sixty Nine runners lined up at the starting line, but only sixty eight charged off into the rain; Brendan O’Hagan had managed to lock all his gear and car keys inside the car therefore become a frustrated bystander. Out on the course Newcastle AC’s Seamus Lynch, blasted his way up and over the first two mountains, Slieve Donard and Slieve Commedagh, undaunted by the conditions. Clear in second place, five minutes behind was Sam Herron continuing to enjoy a very successful season. A big group of runners were battling away for the next positions and included Dale Mathers, Cathal McGreevy and top orienteer Steve Linton. His challenge was blown away soon afterwards when his map took off and was uncatchable despite some desperate chasing.

In the ladies race Steve’s wife Violet was also having problems; staying warm in her case, and she wisely decided to retire after Commedagh, as did a few other runners. This left Castlewellan’s Sinead Murtagh and Denise Mathers of Newry AC battling it out and as the race progressed Denise gradually developed a few minutes of a lead which eventually saw her claim victory. Sinead was to be denied second place though, as Hazel McLaughlin of Lagan Valley had a tremendous second half run which saw her surge through the field, and if the course had been any longer she would have threatened Denise for first place.

Seamus Lynch and Sam Herron had few problems with the mist and rain and both ran strongly right to the finish. Even though the rain was hosing down for most of the day, various runners told me that the underfoot conditions were quite good, maybe due to the long dry spell in July which meant the surface was sloshing with water but the ground below had yet to become saturated and so was not as boggy as expected. 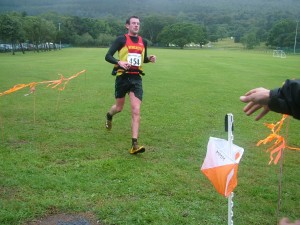 Seamus won but was not happy, kicking various items around at the finish line. He was just two minutes over the four hour mark and was bemoaning various minor errors en-route which had cost him those extra minutes. Considering the conditions, and my experience of twenty two years running the event, I can state that he produced the fastest ever bad weather run, an effort to be proud of. Sam also has plenty to be happy with in claiming second place and Clive Bailey did a Hazel, surging through the field to just pip, Dale Mathers for third place. 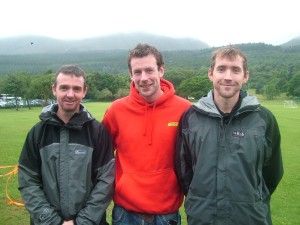 It’s not normal to mention the runner in last place, but I feel Andrew McGibbon of BARF has a special claim to fame. Somehow in the mist between the Dam and Meelbeg he went off course, became completely disorientated and ended up on the summit of Bernagh! Despite this setback which would have seen most throw in the towel, Andy back tracked, did Meelbeg, then Meelmore and then over Bernagh for the second time before completing the long final leg to the finish line. 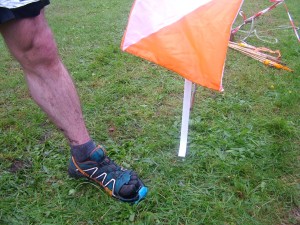 Salomon fell sandals were on display!

So once again a big thank you to all the marshals and helpers for making sure the race ran smoothly and to those fell runners who stopped to help a walker who was suffering from exposure. It was a wild day but hopefully will be a lot calmer next year when it is rumoured that the British Championship long race will be run on the course. Now, we don’t want another Donard – do we?