After 37 years of the annual Annalong Horseshoe Fell Race being run from the driveway at Dunnywater, the event moved to a new location at the nearby NI Water Silent Valley complex for this year’s running of the event. This necessitated a change to the traditional route, adding both distance and climb, but given the benefits of a building to act as race HQ, toilet facilities for all participants, omitting the increasing risks associated with the public road section and ample car parking.

The weather on race day was dull and overcast, cloud covering the majority of the peaks on the race route. Pre-race discussion was all about the second half of the race and the route to the finish, both additions to the old course.

67 nervous souls toed the start line for the 3 mile run along the tarmac access road to the first checkpoint and out onto the open mountain. A few were later to regret their attempt at a parkrun PB at this stage of the race. Timmy Johnson of Mourne Runners was straight into the lead, with Mark Stephens of Newcastle AC deciding to keep pace with him, not wanting to concede any advantage. Johnston reached the first checkpoint in the lead, with Stephens seconds behind. Onto the first climb to Lamagan summit and it was Stephens ever so slightly in front, Johnson right on his heels in second. Although the summits were shrouded in mist with very little visibility, few navigational mistakes were being made over the first section of the race.

Stephens continued to lead Johnston over Cove and Commedagh summits by only a few seconds but started to pull ahead by a minute at the top of Slieve Donard, the highest point on the race course. At the next checkpoint on Chimney Rock, Stephens had extended his advantage over Johnston to just over two minutes.

Behind the leading pair, a five-way battle for 3rd place was taking place. Neil Andrews of East Down was holding onto 3rd place, with Shane Lynch, Clive Bailey of Mourne Runners and cousins Stephens and William Shields in close proximity.

In the ladies race, Gillian Wasson had started off at a fast pace to be the leading lady over the first section of the race, but Ciara Largy had caught up by the 3rd checkpoint on Cove and gradually started to pull away. Ciara continued to add to her lead over the section from Chimney Rock to Binian, using her orienteering skills to good effect. Ciara held her advantage to finish as first lady in 23rd position overall, Gillian Wasson finishing second with a fast-finishing Lynne Spence holding off her Mourne Runners club mate Karalee Porter for third place.

From Chimney Rock, Stephens used his orienteering skills to his advantage, pulling away from Johnston in the mist. Johnston started feeling the strain on the ascent of Binian, giving up on the chase for second, stopping for 10 minutes to eat and drink the remaining contents within his rucksack before finishing the climb to the Binian checkpoint. Mark Stephens was first across the finish line in a very creditable time of 2:38, Timmy Johnston finishing in second place 14 minutes behind in 2:52.

Behind the leading pair, Andrews was holding 3rd place at Chimney Rock, a minute ahead of the four-person chasing pack behind. On the next leg to Binnian, former Mourne Mountain Marathon winner and ultra specialist Lynch used his endurance strength to pull away and draw slightly ahead of Andrews at the checkpoint, extending his lead on the rough downhill section to the finish by over three minutes, finishing in 2:57.

Meanwhile, behind the leading groups, plenty of drama was happening due to the poor visibility. One pair reached checkpoint 2 on Lamagan, promptly got lost on the way to checkpoint 3, ended up back at the bottom of Lamagan, at the point which they had started their climb, then went to the last checkpoint on Binian, before jogged into the finish. Another runner reached checkpoint 4 on Commedagh, only to get lost on the way to the Donard Commedagh saddle, ending up in Newcastle and cadging a lift back to the finish in Silent Valley. The various route choices from Chimney Rock to Binnian and then to the finish line provided plenty of discussion at the finish.

Ciara Largy’s achievement in winning the ladies race deserves special mention as it means that Ciara now has the distinction of holding the Ladies course records for both the old course and the new course at the same time.

After ‘retiring’ from mountain running, former multiple British Veteran Fell Running champion Jim Patterson made a welcome return to racing again. Even at the age of 72, over half the field was behind him at the finish, as he finished in 30th place overall, winning the MV60 age category. In no way was Jim decision to race prejudiced by the race organisers offer of a free race entry to over 65’s!

We also had a visitor from London taking part in his first Northern Ireland mountain race, his local training ground being Richmond Park, which certainly contains none of the terrain that he faced on Binnian today!

At the finish, all runners enjoyed the post-race refreshments provided by the B.A.R.F. hosts. Prizes were distributed by B.A.R.F. member Ian Taylor, in his position as President of NI Athletics. Ian has completed 33 of the 38 Annalong Horseshoe races held to date, unfortunately having to miss this year’s event due to injury.

Many thanks to all who participated, organised and assisted in the race. Special thanks to NI Water for permitting the use of the Silent Valley complex for our use. 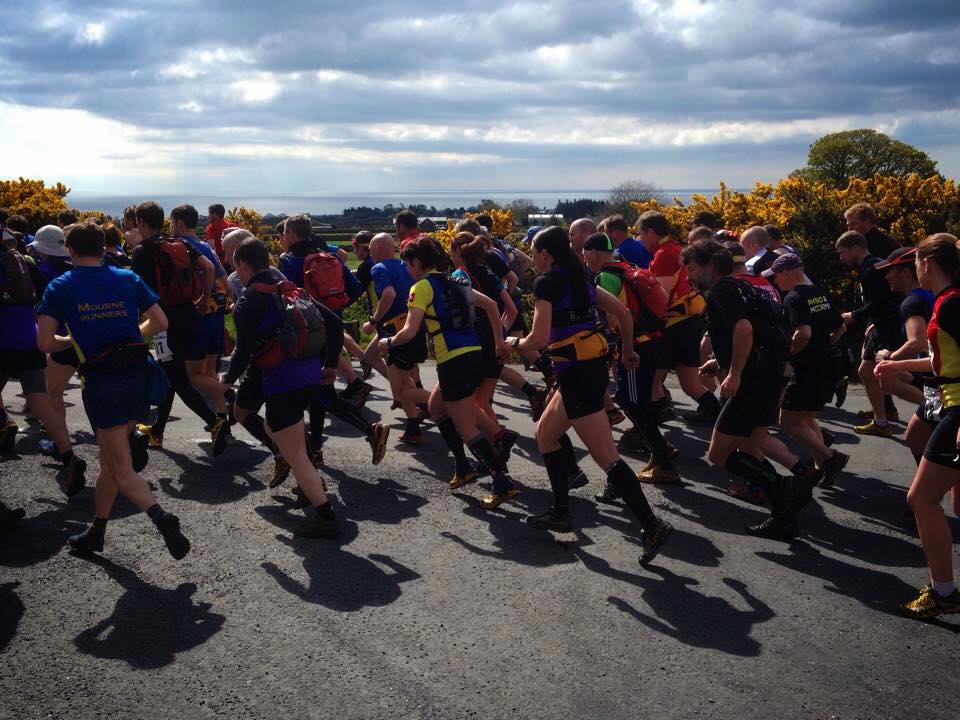