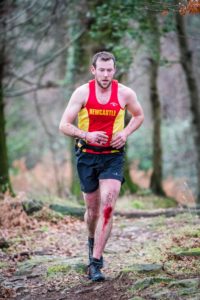 This must have been the mildest weather ever for the annual Turkey Trot race, in total contrast to the pace at the front end of the race which was seriously hot. Five runners broke away, almost from the starting gun and were already well clear by the time they reached Parnell’s Bridge. After racing to the Trassey Track and climbing to the high point of the course at the style on Slievenaglogh it was Edinburgh based, Carnethy Hill Runner Eoin Lennon who had developed a 30m lead over last year’s winner Seamus Lynch with the other three runners just a short distance behind. The descent from the Hares gap turned out to be the decisive moment of the race where Seamus local knowledge provided him with the better line back down onto the Trassey Track to gain the lead which he held all the way back to the Mountain Centre finish line. East Downs Aaron Mc Grady was just two minutes shy of the winning time with former winner Paul Pruzina and Mark Stephens just a handful of seconds further behind.

Megan Wilson of Dark Peak Fell Runners had a more comfortable time winning the ladies race from the ever green Shileen O Kane with Aisling Allum of Carnethy Hill runners claiming third place. First veteran home and a vet 50 at that, was Newcastle Ac’s Pete Grant in 7th place overall and just behind him was the first vet 40, Springwells Barry Mullen. Special mention should also be given to the amazing Vet 60 running machines that are Newcastle AC’s Dominic Mc Greevey in 20th place overall and Mary Mackin of Dromore AC in 60th place overall.

The prize giving was a well attended affair and all joyfully tucked into mulled wine, mince pies and other goodies provided by Barf club members. There was a special round of applause for those catering and helping out at the centre and also for those out on the course marshalling and ensuring everything went smoothly. Also a big thank you to those club members who contributed food and prizes which were to the usual Christmas reject standard.

So Seamus Lynch collected the Martin Mc Mahon trophy for the second year in a row and as this was a new route for the Turkey Trot he has set a new course record, as he did last year when we also changed the route. Maybe I will change it a bit more next year so that Seamus can return and try for a hat trick of changed course records!